Finally! Feelings are awakened and we are on the path to something worth exploring. Just a twist in my highlights, I decided to give emphasis and share meaning behind the screen caps I personally loved in Week 4. The WooJoo couple turned on the love meter to a higher reading making my heart flutter with glee.

Without further a do, let’s all take a gander as I share the different moments that grabbed my attention.

We pick up were we left. Gun Woo and Jung Joo are still on ala lovers-quarrel state. Nobody is initiating to speak with each other. As much as I love seeing them while bickering, we need peace more. For the first screen cap favourite I pick the Jeju Ferry scene. The thought of Jung Joo leaving brought to surface another layer of his growing feelings for Jung Joo.

Gun Woo: Sajangnim, please don’t kick me out. While you are away, I’ll work really hard.

It’s music to my ears whenever Gun Woo calls Jung Joo, Sajangnim. Its elevating her in a cool way and she shows it well. She shyly smiled on the side and even took into account that he likes seeing her hair down. I smell something good coming out after this. 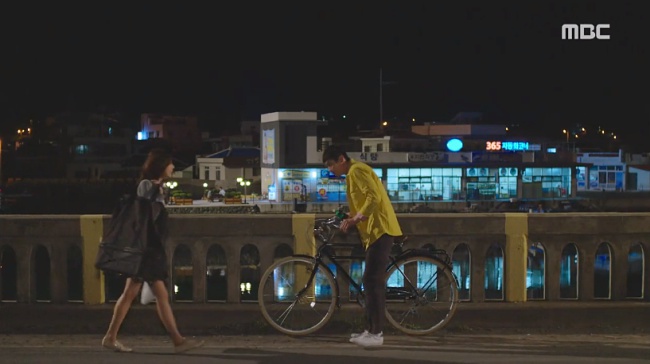 True enough, Jung Joo went home with her hair down later that night. Nobody can resist her new do, especially the eyes of Mayor Hwang. He exerted full force and pedalled strong just to reach Jung Joo. He was sweating like crazy when he stopped few meters away to see Jung Joo get off the bus. Aigoo Mayor Hwang, the things you have to put through just for her. Unlike someone I know, he doesn’t need to lift a finger and she’d be close to him already. 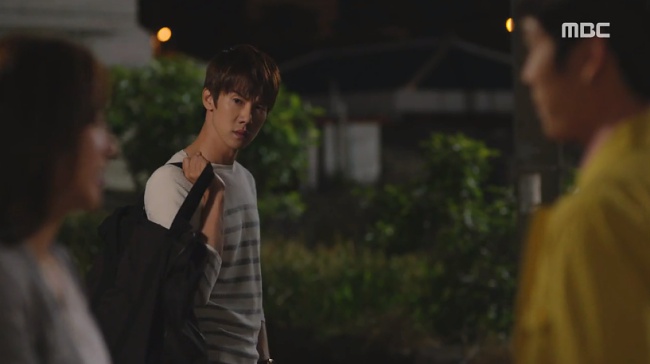 No other jealousy can look this cute!

Gun Woo is naturally repugnant when he sees Mayor Hwang. Heh. Honestly, I love him just like this. He dislikes seeing Jung Joo and Mayor Hwang together. It’s childish to respond the way that he did out of jealousy. I mean, remembering the Hwangto model gig is below the belt. But we are talking about Baek choding, there’s no remedy for someone like him. 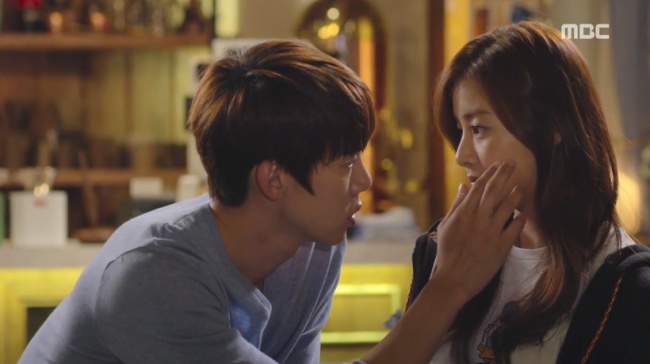 Jung Joo: Even now, when I’m with you.. my heart pounds so much. I’m so worried that you might find out. What if I said that??

Oh my dear, you just did! EEEee. His reaction is evident that he felt a strong thud coming out of his chest. He just heard an indirect confession, but we know that there’s meaning behind her words. What if? This question will surely linger for sure.

This scene just speaks so much of something peculiar hiding underneath Gun Woo’s heart. That’s the reason why he can’t fathom it. For someone like him who was so into Ji Won all his life, he doesn’t know what it feels like to truly care for someone not out of spite. I’ve mentioned that he’s been playing a game with Ji Won. He knows how to manipulate his way into her scheme. But its different with Jung Joo. He may look like he’s playing around with her at times, trying to tease her with spicy rice cakes. I observed that he goes beyond tricks, giving Jung Joo the things she needs and helping her without expecting anything. Gun Woo’s motive may be influenced by her so-called illness. Yet you could see the man he is becoming thinking of Jung Joo’s welfare. 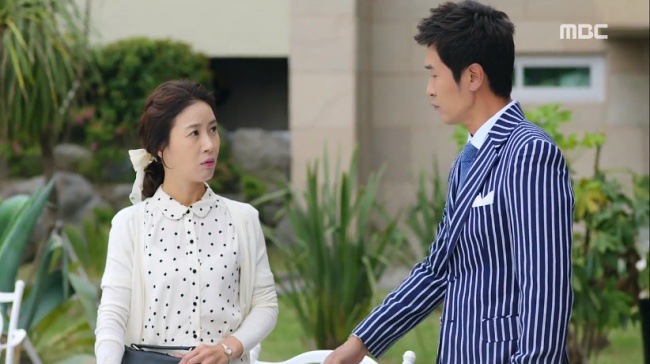 Oppa and Hae Shil are just the cutest. Oppa speaks and acts like a man, but with Hae Shil I think he is more childish that Gun Woo. Hahaha. Their pairing just brings joy and light on my screen. We need a breather, Oppa is leading Hae Shil’s heart to love again after 30 years. Oppa knows about Hae Shil’s love story, so i hope he’d be man enough to be responsible for a love that’s worth maintaining. 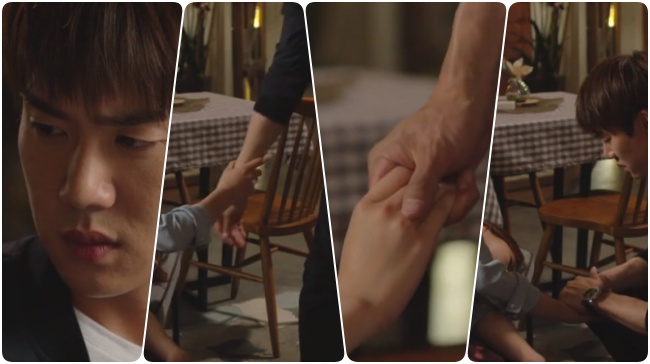 Short but chuck-full of meaning. Jung Joo had her first diving lesson earlier that day and she caught her first abalone. She promised to give it to Gun Woo but since Gun Woo left to stay with his siblings, she ate it with soju as her only company. When Gun Woo arrived, he saw Jung Joo sleeping and caught her just in time before she falls. This scene is interesting. Gun Woo had Jung Joo in his arms and he felt uncomfortable having her so close to him. EEEeee. As he gets up to leave, Jung Joo held his hand and asked him not to go. Even Jung Joo’s unconscious self prefers Gun Woo by her side. Me like!! 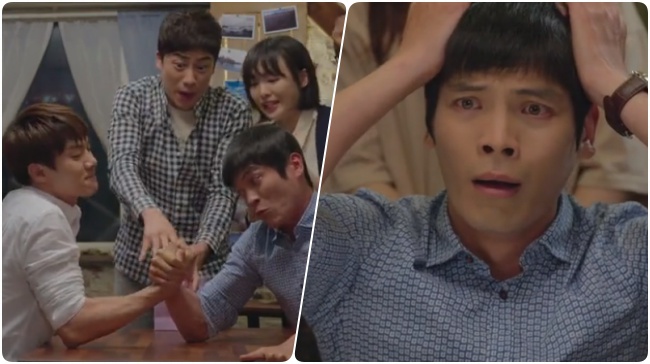 So they are going to wrestle for Jung Joo’s sake?? Both man are eager to win the necklace (aka Jung Joo).

It’s quite obvious Mayor Hwang will lose. I think that battle proved only one thing. We know the man who won her heart already. I’m sorry, Mayor Hwang.

Symbolism is the heart of this battle. At last Gun Woo got something coming from a fruit of hard work, winning the necklace. Though Jung Joo helped on the side, he still gave his best shot. It’s a meaningful gift. Now Gun Woo is putting efforts and work all for Jung Joo. Imagine life without her, Gun Woo would still be doing nothing. Now we see him work on the field and less staying on the hammock. I love this kind of progress. 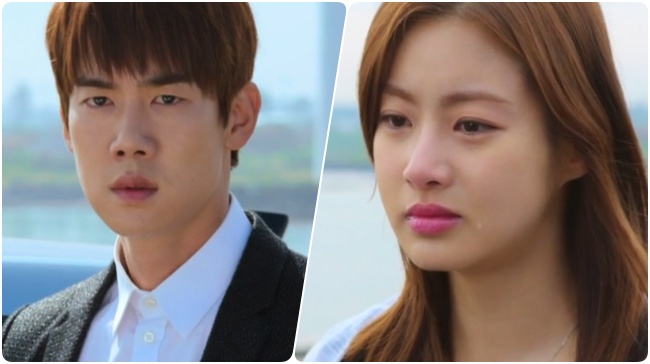 His eyes! That’s the look of determination. Now things will really change from here on.

I love that Ji Won’s plan always backfires. Even if she told the truth to Gun Woo, it wouldn’t make him stay away from Jung Joo. Especially now, he has fallen for her already. This has a two way effect of course. Jung Joo now thinks that Gun Woo showered her with sweetness, attention and kindness only because he thought she’s sick. On the other side, Gun Woo finally realises Jung Joo’s importance after knowing the truth. There’s no betrayal here, like what Ji Won thought. Jung Joo didn’t lie, it was all Gun Woo’s fault for believing she’s sick. He’s such a fool for thinking that the medicine bottle is enough evidence to prove his suspicions.  On the side, this cemented his true feelings for Jung Joo. 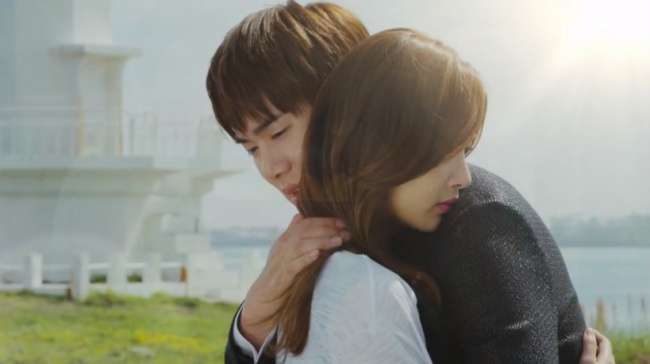 I’m glad this side story (mistaken sickness) is over. We can move on and embrace a new start. Looks like love is here to stay and I’m glad both are on the same page.

This smile made me forget everything that he did so far! 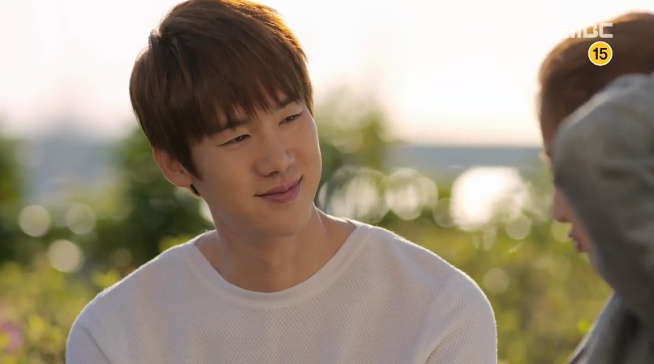 Sometimes, separation is needed to validate our own feelings. Gun Woo is dense, so he needs to find out by looking more deeper. When Jung Joo left, and he went on living his “comfortable” life, he felt more bored than usual. Since he’s used to working around Jung Joo, without her presence his world felt empty that no amount of leisure can compensate. No more resting on your laurels dude!

I’m super glad that Jung Joo’s sickness is clarified. I should thank Ji Won for this, she served her purpose. For me, Jung Joo’s medicine is like Gun Woo’s feelings. He’s so oblivious and foolish about it. He has no reason to get mad because Jung Joo didn’t lie to him, he was the only one believing she’s sick. Jung Joo wasn’t aware that he’s been caring about her with this motive in mind. Misunderstanding evolved around their relationship because they don’t communicate.

Well, this can be said of Gun Woo. He just assumes without asking for confirmation. Just like the medicine or Jung Joo’s bag that he mistook to mean that she’s leaving. Stupid Baek choding! Finally we can end the misunderstanding and start a wonderful relationship. Hopefully between two grown ups.

Gun Woo, throw your childish ways dude! It’s time to be a man and love like a man. 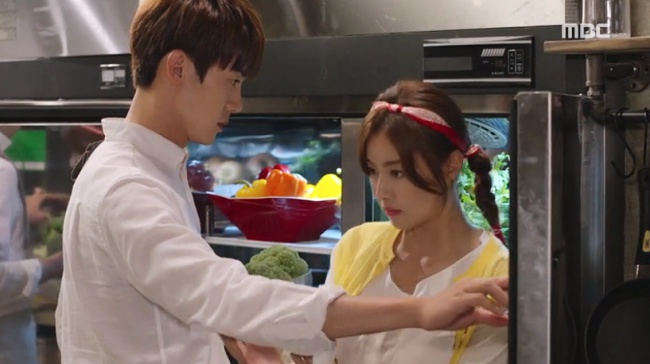