Jung Hwan-ah, if this is not love, tell me what it is..

Deok Sun-ah, I wanted to give this when I graduated this year. I’m only giving it now.

Hey, do you know the things I did because of you?

So I can go to school with you, I waited over an hour in front of our door everyday.

Until you came home from the library, I was so worried that I couldn’t get a wink of sleep.

Why is she so late? Did she fall asleep again?

Hey, my mind was only on you. You.

When we ran into each other accidentally on the bus, when we went to the concert together, and on my birthday when I received the shirt as a present from you, I was so happy that I thought I was going to go crazy.

I wanted to see you over 12 times a day.

And when we met, I was just happy.

I wanted to say it since a long time ago.

The love Jung Hwan is saying here is not only about the past but most importantly the love he still have for Deok Sun, NOW. It is genuine and heartfelt. How can I even think it was a joke?

Jung Hwan confessed in front of his friends and Deok Sun. It took time and courage to say it out loud. It was that serious! I looked deep into his eyes. Even Deok Sun can recognise the truth behind his words.

No. This is not a joke. He just needed to break the silence. It was just stupid to have twisted our reaction towards the end. I fell for it too! But I can forgive because I know Jung Hwan has a reason for doing it.

Blue and I had a conversation the moment the official video came out. I was on a lifeline and Blue came to my rescue! After her translation, I fell in love with Jung Hwan’s confession even more. Listening to him speak, I was already mesmerised. I was deeply touched, it felt so real. Ryu Joon Yeol, you are brilliant!

Writer Lee Woo Jung is insanely awesome! She can write scenarios where everything is possible. I respect those who are in Team Taek and Team Jung Hwan. You can say and interpret this scene in a million of ways and I wouldn’t find fault, no matter how crazy it is. But personally, this scene just showed how Jung Hwan’s previous actions led to the growth of his love for Deok Sun. Until this very day, he is assured that he loves her. Finally, Jung Hwan learned his lessons well. As a man, he took it upon himself not to blame anyone or anything. Dude, I know I felt frustrated waiting for you but I felt relieved after this confession.

It took years to have the courage to confess.  I’m glad Deok Sun heard it. Now, there’s no room for “what if”, just “what to do now?”.

It is Deok Sun’s turn. We are waiting for her reply!! At the end of the day, it is her decision to make. After all this, she will marry that one person she truly loves. We can all be happy for her. 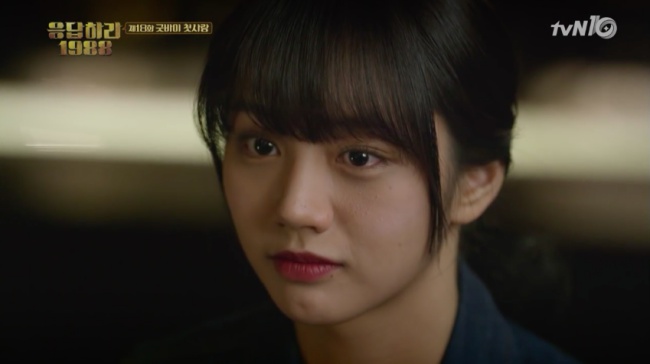 NOTE: This translation is courtesy of Blue. We are aware that there are some translations of this scene that has already been released and respects it. Blue wanted to clarify that Jung Hwan graduated earlier in the year and the confession happened in October.