Black Knight continues to improve in the ratings, with Episode 8 averaging 13.2% which moves it from an okay performer to a good one (in today’s terms). Is it because of the chemistry between Kim Rae Won and Shin Se Kyung?

I was drawn to this drama because I love Kim Rae Won and needed a romance but what keeps me watching are Seo Rin’s antics. Am I the only one enjoying this character? Or are the Korean viewers like me? She was annoying when mysterious but the actress has begun to play her in a comedic way which works so much better. I usually hate obsessed second leads but I’m finding her more entertaining and think her scenes with Baek Hee are a lot of fun, particularly for their reluctant/forced frenemiship.

And when I say I enjoy Seo Rin, I don’t solely mean the actress because I enjoyed her in Hae Ra’s body and how she messed with both men, particularly making Ji Hoon do push-ups. 😀

The show itself made a comparison when Seo Rin said she too had been thinking about Myung So/Soo Ho and I agree.  They both spent years fixated on someone who wasn’t thinking about them but I suppose the difference between romance and psychotic obsession is reciprocation.

Moving on, was Villain Park in pain because he tried to mess with Soo Ho? Because as we know, it never ends well for those who do that.

He met both Baek Hee and Seo Rin as a teen and saw that they don’t age from their encounter in the cab. He’s seen Seo Rin recently but as he was in pain and delirious, wonders if it was a dream. But he’s met Baek Hee again and didn’t believe her when she said she was no longer in touch with his “Noona.” He has the Boon Yi/Myung So ring which somehow negatively affects both Baek Hee and Seo Rin because the latter stole it and it must be returned to the rightful owners who I doubt have any memory of their old lives. And I say “doubt” because this is a drama and who knows, maybe seeing the ring will trigger something in them.

Stealing Hae Ra’s identity came with both Baek Hee and Seo Rin getting tattooed and because my girl is crazy, she’s risking a face tattoo – or worse – and has stolen Soo Ho’s identity to ruin his relationship with Hae Ra. Her weird drunken habit previously didn’t work so she’s going to try harder this time.

My first guess would be that she might be successful in driving Hae Ra away for a short period but having been accused of strange behavior by both Ji Hoon and Soo Ho, I wonder if she’ll remember that when fake Soo Ho acts suspiciously.

Anyway, I’m mainly looking forward to her actions and their repercussions this time around. 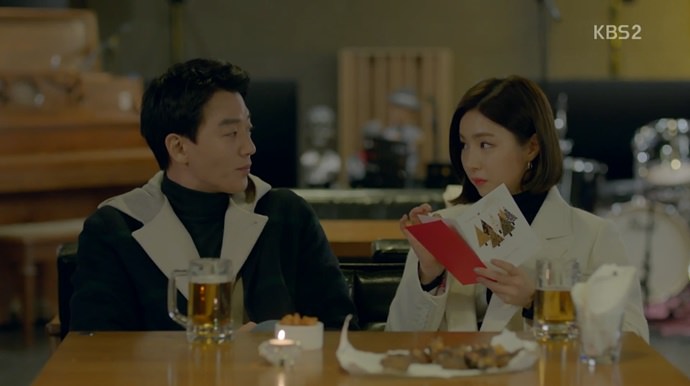