This season is really special for me. I say this because, I usually find a drama that becomes special to me around this time *coughReply1988coughI’mNotaRobotcough*

I’m not one to be influenced by popular demand. If I love the characters, no matter who the actor is, I’m here. I will write. That said, I love Park Bo Gum, but more than my love for him, Encounter just feels right for me this season.

Some of you might think Encounter is boring, it must be because it is simple and it has a cliche framework. Family drama is no different here, especially when monster-in-law is involved. The narrative might be off too, when you expect something grand. If this is the case, I do think Encounter isn’t for you. Stop watching it.

However, for those of you who finds beauty in simply reading a book, getting to know the characters page by page, then JOIN ME. Like what Jin Hyuk said “books allow you to rest in between.” It’s exactly the way I view this drama. 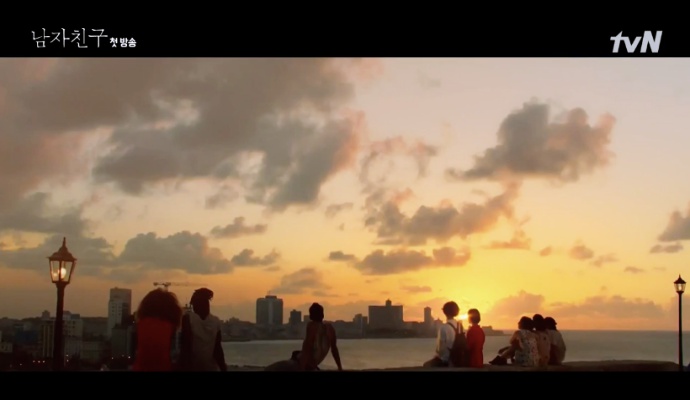 We go straight to Cuba. I haven’t thought of Cuba beyond volleyball. I was fortunate enough to watch the World Grand Prix Volleyball game back in 2000. Cuba was one of the powerhouse team at that time. That said, I was pleasantly surprised to see Cuba as a place where romance is beautifully captured. Indeed, anywhere is a place for love to be planted.

The vibrant sound and natural facade of Havana lured me in! I started researching. Thanks show, Cuba is now included on my bucket travel list.

Moving on, the set-up was simple. Two people from different backgrounds met in one place. They are both on a journey on their own but you can already see who is enjoying and who is lonely. The contrast even goes as far as the place they stayed and the moments they encountered apart. When Kim Jin Hyuk finally met Cha Soo Hyun, it felt to me like the world balanced everything. Soo Hyun lost her belongings and she got blisters from wearing high heels to climb up the road to El Malecon Beach. While Jin Hyuk just have enough money for himself plus a free spirit exuding in his aura. Contrary to Soo Hyun, Jin Hyuk simply goes with the flow. But at this very moment, they become equal. I love the fact that even with less, Jin Hyuk can still provide for her needs and make her happy. Nothing grand or overly romantic.

I love that both of them enjoyed a simple meal and danced together! My favourite part was seeing them walked barefoot along the cobblestone street. People around them thought they were odd, but it mattered more that both of them enjoyed the experience of walking together. Moreover, it felt like they were uncovering bits of themselves in their conversations. It was lovely to hear. There were no pretence.

After that, Soo Hyun wore a simple pair of local slippers that Jin Hyuk happily bought for her. It is cheaper than her high heels, but it gave her comfort. That’s exactly how Jin Hyuk made her feel after a day of mishaps. This already served as a sneak peek of how their relationship will be as the story progress. She is more than a damsel in distress or is Jin Hyuk simply a charming pauper. I don’t think we are heading on that direction. But what I do know is that, they make each other feel loved, and special.

Am I ready to witness this kind of romance? Yes! As long as I will see Jin hyuk’s smile that illuminates brightly amidst the dark world of Soo Hyun. Count me in.

Light, easy breezy! Something I really want now. Please subtract the family in-law cliche. It still upsets me that K-drama tends to tamper the heart and reputation of a mother. There is no excuse at all to think of your children’s happiness when you manipulate their lives. But I’m happy to note that his Son is willing to step up and fight to live his own life. He won’t succumb to his mother and just say yes all.the.time. Good for you, Dude! Breaking rules in K-drama is possible.

The supporting casts are adorable. Mr Nam plays as the cupid here. I’m glad he knows how to spot a man with a good heart. Truly, it is Bo Gum’s heart that is carrying this show! I love how the camera pans to frame him exude a heartwarming aura. He doesn’t even have to speak. It’s amazing to watch him while I shiver in delight with the emotion he gives off on camera.

Bo Gum really makes me feel everything, all at once! It’s this giddy feeling that is so addicting that only makes me draw nearer to him.

It’s funny how Jin Hyuk is so proud doing simple things and yet he actually fails at it! It is kind of dumb, but since its Bo Gum, it becomes charming. Aigoo. Have mercy on me. 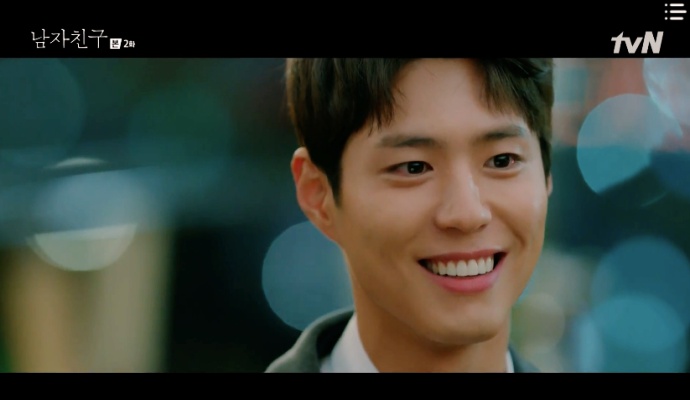 Why is Park Bo Gum so beautiful? Im saying this beyond his good looks. His heart screams of genuine emotions, just by looking into his eyes. Ever since I’ve watched him as Taek in Reply 1988, I find that his innocence and courage are an odd mix. But Bo Gum has these traits innately in him that makes him a charming man, actually. Even though he is young, he has a manly aura that makes it possible for any woman to depend on, and throw their trust unto.

Just a side note. When Bo Gum did the show with PD Na, Youth Over Flowers Africa, I saw how raw and beautiful Bo Gum’s heart is even more. Not to mention, his big appetite. He is a gorgeous contradiction. I remember how bold Bo Gum was when he agreed to do bungee jumping in one of the world’s highest bridge. Its normal to feel scared, just how Ryu Jun Yeol felt. But here comes Bo Gum, with vigour and youthful exuberance, he jumped without second thoughts. Yes, he was scared too! But he overcome it with courage to simply jump out there and enjoy the moment.

Having said that, his character here in Encounter, is no different. Kim Jin Hyuk is sincere to the core. I felt like my heart was melting every time he just speaks what his heart wanted to say. That very moment when he shouted Soo Hyun’s name at the end of Episode 4, I was also in tears! It takes courage to step forward, especially in that critical moment when everyone can just think and say something awful. But he disregarded all that, simply because he wanted to break the pain Soo Syun was feeling. He boldly stepped forward, a gesture where I felt his sincerity to comfort her, and it was as if he was saying loudly that she is not alone. It is beyond admirable. What a man! To think he is young and have nothing to lose, isn’t even his excuse. At that moment his love proved to have the power to take courage, to take risks, to protect, to be self less and to ensure that a problem can be carried by two.

Yes, he even made eating ramyeon worth millions, not even the best Chef could cook that. His invite was priceless. If this man was not played by Bo Gum, it won’t work for me. To be honest, Song Hye Kyo can feel flat for me at most. But then, when she is mixed with Bo Gum, there is a push from her that she becomes less bland. I blame myself for being sensitive to emotions and I’m greedy to want to feel more.

I’m a fan of PD Park Shin Woo! To date, Angel Eyes still remains as one of my top favourite K-drama of all time. I wasn’t surprised that every scene will be framed in a stunningly organic way! My eyes were pleased, but my head was aching trying to select the best shot! You know, I have to limit the photos here. LOL. 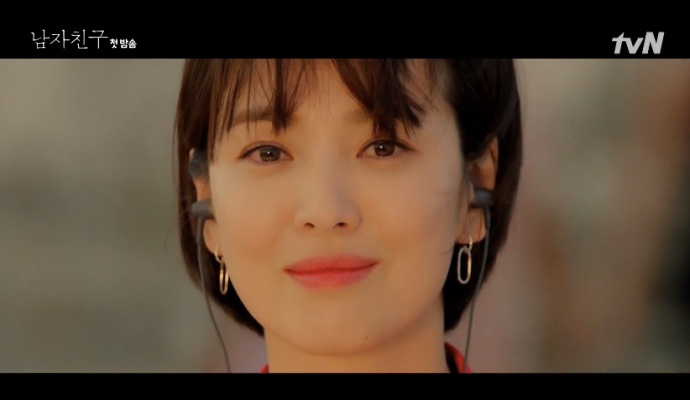 PD Park allowed Song Hye Kyo to have shining moments. As I’ve mentioned, I always feel like something is missing with Hye Kyo. Thankfully, PD Park helped make her emotions stand out. There were moments that I felt Soo Hyun’s character when I look into her eyes. That spelled a difference for me. I remember PD Park required Ku Hye Sun and Lee Sang Yoon to act and feel with their eyes. PD Park still works his magic through the eyes of his characters.

Soo Hyun is never allowed to do what she wants. But when she is with Jin Hyuk, she is free to do anything at her own will. I love that he makes her feel that she can do everything with him around. It speaks boldly of his confidence to lead her to her own happy place. It is beautiful to witness a man do that. Soo Hyun felt a sense of comfort in his simple gestures, she naturally enjoyed every moment with him. I love seeing her enjoy and be more true to herself.

Jin Hyuk speaks like my travelling heart to a tee. I enjoy walking around the less touristy spots of a country I visit. I try to explore like a local as much as possible and simply immerse myself in their culture. I’m an OC planner but I also enjoy when my itinerary goes astray because it presents a different experience. Especially when it leads me in a state of  “I lost again, bound to no where I know.” Heh. TMI, it happens 100% of the time whenever I travel out of the country. This statistic is proven. I’m not proud of it, but getting lost teaches me the best lesson out there! When Jin Hyuk explained how he worked hard just to travel to Cuba on a budget, my heart was stolen. He used hard earned money, and spent it with enthusiasm. What moved me the most was the fact that he was willing to help, even if he has less for himself.

Time seem to slow down whenever I travel. At the same time, it is also fast enough for me to want more, and to stay longer. I wish this was also the case when the set-up went back to South Korea. Not that I’m complaining, but we could have been spoiled and spent more time in Cuba. 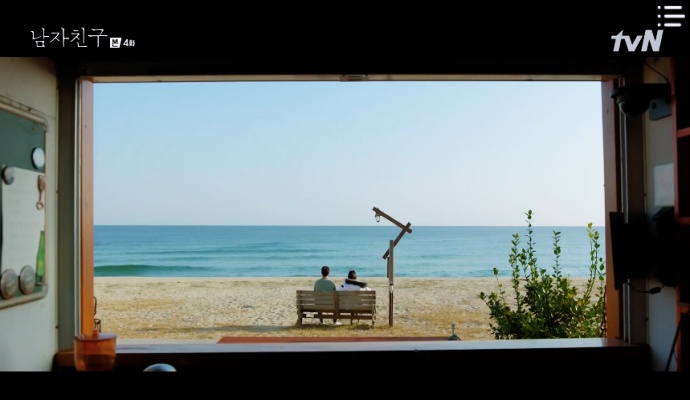