For the love K-drama, I’m back for another review!

I love how “simple” yet “complex” this story is. One Spring Night made me use contradicting words because it challenges me to think beyond what I know.

The actors are effortlessly making me feel the attraction. It’s magnetic! I can’t take my eyes off them. The force is too strong to resist. They can simply sneak to glance at each other, and I’m in a puddle of goo already. Just like the scene at the library. The feels is real. And you know what this means! I will definitely write a recap for this one.

I’m coming in without watching Something In The Rain. So this is as fresh as one can get! Jung Hae In is someone new for me. Don’t judge. I find this as my biggest advantage, I have none of his past K-drama to compare him with, except his cameo and supporting roles. I know that falling for him is easy – I just need to take a look, right? But no. This man’s charm is way beyond his looks, it is way beyond what our eyes can see. I truly believe he is one of the few for keeps.

PERSONAL THOUGHTS on Episodes 1 to 8:

The first encounter could be all you need to be smitten by someone, like destiny. – Jung In

The meet-cute scene, isn’t really the most ideal. Imagine, Lee Jung In (Han Ji Min) hasn’t even brushed her hair nor her teeth. She has no make-up on but with a bare-no-washed-face, with sleep dust instead. Heh. I don’t even understand how Yu Ji Ho (Jung Hae In) found that attractive. But hey, I guess he psyched himself up since if they do get together, he’d wake up everyday with her face by his side. So, it was advanced thinking on his part. That pharmacy scene was nothing less than adorable. Ji Ho was taken aback when Jung In asked him if she should give her number. His reaction was priceless! It came with no surprise that Ji Ho gave his own number instead. Add to that, hearing him say “Lee Jung In ssi” for the first time sounded the sweetest! I knew right then, I’m all in.

We are trudging on troubled waters here. It is more than what social stigma calls “cheating” that I’m talking about. Ji Ho and Jung In are having battles within their own hearts. I love internal conflicts more than external ones. The latter feels contrived, and I usually cringe whenever the story chooses that route. But when the heart is involved, it is more complex and interesting. Discovering your hearts desire, and getting there is the best part of the journey.

The stumbling block is more than Jung In having a boyfriend. It is actually the fact that she is standing on a gray zone. I do understand the confusion. But the conflict is, why feel this way when she truly understands her heart? Apparently, she doesn’t! She does not know what love means to her. Sad to say that she hasn’t really experienced it in a deeper way. Since there is no risk involved in her relationship with Ki Seok, it felt flat. It almost sounds like the relationship is too perfect to be true. They see each other after work, check. They go on dates, check. They respect each other’s privacy, check. I can go on with a list. It’s mundane. Some won’t complain, but some of us would think twice and ask, “What else is there?”. It was not surprising they are headed towards a break-up, even without Ji Ho in the picture. 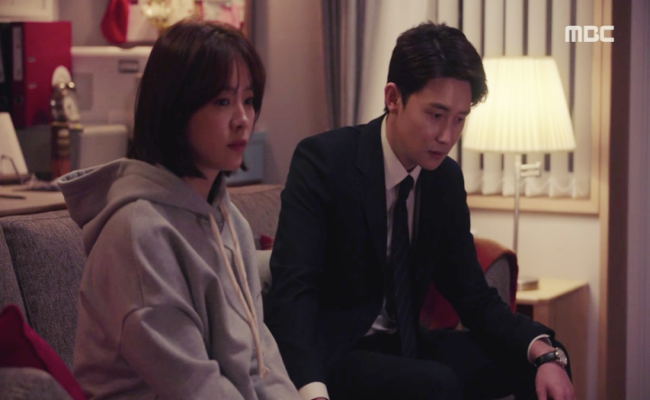 Ki Seok’s advantage is that he knows Jung In’s character, and respects her for it. What is the problem with him? Everything caters for his convenience. It feels to me like he is in a relationship for the sake of having one. You know, the kind that elevates you in your workplace. NAME TAG: Your wife is a beautiful woman. You just need to provide her with a comfortable life and let her be. It sounds good on a superficial level. but when you look within it is empty. I believe that being in a relationship is more than just for show. I’d rather be single than be someone who has a boyfriend for the sake of having one, or for me to feel less lonely. This is how I see Jung In and Ki Seok. They are stagnant. No wonder everyone in Jung In’s life thinks she has a boring relationship. There is a fire, but it doesn’t even provide enough warmth.

On the other hand, Ji Ho has a different fire of his own. From the start, he showed Jung In that he is interested. It was a catapult for Jung In to look his way too. When I heard him say that it was his intention to not reply on her message because “he wants to see her again, just like the first time.” That was risky, but he said it nonetheless. I love that he was willing to wait for her, rather than take the easy route simply replying. After all, she was a message away. But no, this man knows exactly what he wants. He is even willing to cross the line. But Jung In spelled out the capital N-O.

Come to think of it, they have done nothing wrong. Just yet. But something is brewing inside their hearts. The seed has been planted since that pharmacy scene. Little do they know, they are watering it, bit by bit. Thanks to all those stolen glances! They think of each other, more than needed every day. They don’t spend a whole week together, but when they do, the quality is enough to make love blossom. Besides, it is when they are apart that keeps their fire burning incessantly. The longing to see each other again is so palpable! No wonder, even if they’d just look at simple traces, like the lights on Ji Ho’s apartment, they’d still choose to stop just to take a moment. Absence truly makes the heart grow fonder.

Most of their conversations hits the core of my heart. Their witty banter are delightful! It is flirting 101, but better. The kind that makes your heart beat faster. Add to that, PDnim knows exactly how to make us feel frustrated whenever they we wanted to say something, but they can’t. It’s a beautiful conflict! The best part? Even in anger and frustration, they can stop and laugh together. It’s the sweetest sound they create. This makes me want them to be together, ASAP. 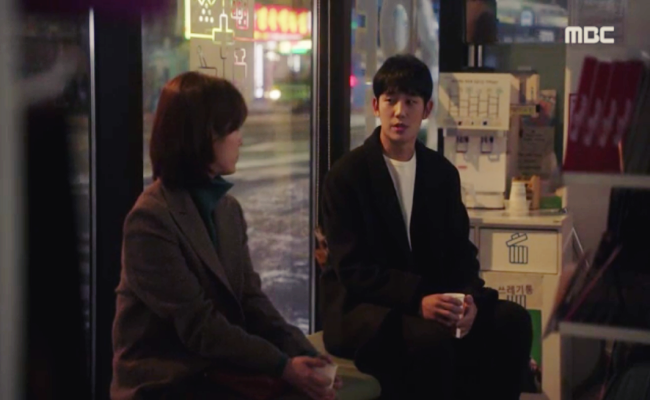 Let’s be friends. You don’t meet people like this every day. so we can be acquaintance from now on. – Jung In

That first conversation was nothing less than a back-to-back rejection. But even with this, Jung In and Ji Ho cannot be stopped.

From this night, they were blunt and honest already. I expect them to have that dynamic through their relationship. It is raw, their foundation is strongly built with it. The facts were laid down from the get-go. Ji Ho has a son, while Jung In has a boyfriend who is at the edge of being a fiance. From here, Ji Ho already proved that he is very interested in her, his curiosity led him to hope he’d see her once again. Sweet. I’m also convinced Jung In was also into him, just that the boyfriend tag keeps pulling her away. Hence, she offered friendship first. I’m glad our man disagreed to simply be on that zone! From the very start, he knew he wants more than that. I loved him for it.

Honesty is hard to get by. It is rare for someone to trust a stranger with something so personal. You don’t just go around announcing you are a single Dad, people always have something negative to say. But here, this was the first thing Ji Ho told Jung In. I love that he didn’t even hesitate! I was in awe. He loved the way Jung In was able to accept him for it, without judgement. The seed was planted right then and there! No doubt, this was a pivotal moment. Even though they parted ways after that conversation, something in their hearts was awakened. I don’t think Jung In has ever waited for a message that made her stay up all night hoping to see Ji Ho’s name on her phone. Or never did Jung In expect she’d have a change of heart just by seeing the snow.

If you come to me now, there is no turning back. – Ji Ho

I want to put emphasis on the library scene. The book shelves represent the hurdles they have to pass through, or the blocks keeping their feeling hidden. But more than that, the stolen glances were truly the winner. They have been doing this since day one! They were already secretly watching each other, even from a far.

Remember that dinner after the game?

Ji Ho was so discreet, knowing that Jung In is sitting beside his boyfriend. But our man can’t still take his eyes off of her! He didn’t even mind giving her a new pair of chopsticks right in front of Ki Seok, as if it was a natural thing to do. Heh. Jung In was surprised with this gesture, perhaps Ki Seok hasn’t done it for her. From the start, Ji Ho has been making her feel like everything is new.

Just how far should one go, though? Should you take risks in life or shouldn’t you? – Jung In

My answer is, go all the way, Jung In-ah. Don’t let Ji Ho pass you by! So far, he’s been nothing less than amazing. Ki Seok might have marked his territory on you. But whose to say you can’t move out? When you follow your heart, there is no such thing as the better guy. The heart is involuntary, it doesn’t follow no one. Love simply gives the answer clearly. We all know that it’s pretty obvious, even in this early stage.

Ji Ho came into Jung In’s life just in time to show her that there is more than what she already knew about love. This love will be a rude yet wonderful awakening. She will soon realise that despite the risks involved, she will go beyond limits to pursue it. Day by day. With Ji Ho around, there will be no dull moment! Even in silence, there is a comfort.

The smile on my face whenever they are together never seem to fade. I automatically find myself giggling with them! I’m not hard to please, but only those with extraordinary chemistry can make me feel this way. I’m glad Han Ji Min and Jung Hae In can deliver what it feels to be in-love, so naturally. They are not even a couple, but they took me there already! LOL. What is going to happen when they finally decided to be together? 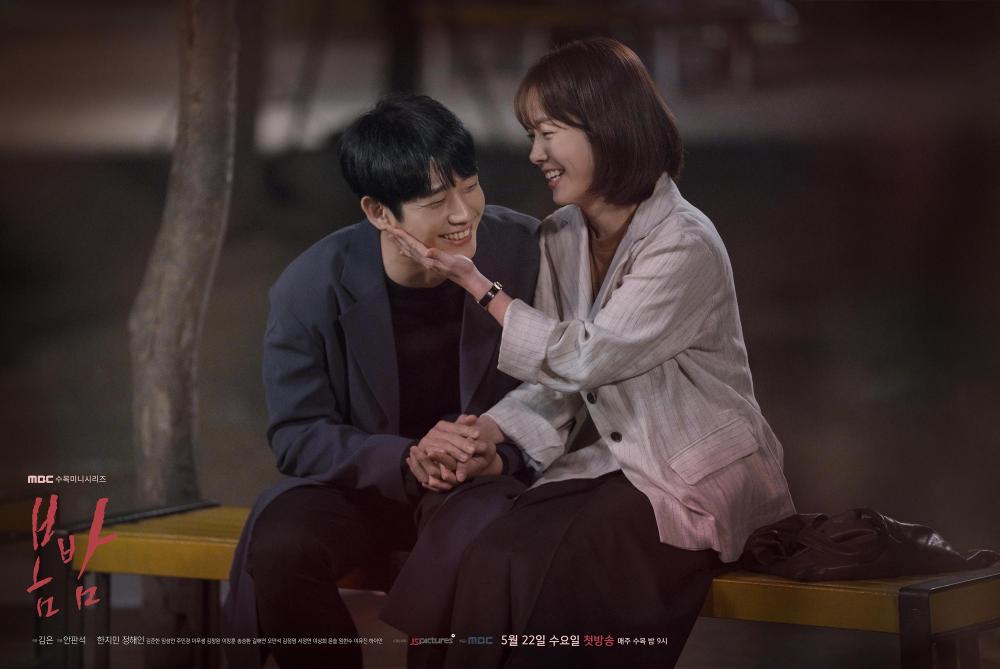 I hope I won’t turn to a cheeseball writing this one.

Until next time! ❤️