Are you willing to cross the line?

We often hear this question. Surely you have experienced, at least once, what it feels like to be in this crossroad. Right? If not, Jeong In and Ji Ho did! One Spring Night beautifully captured the feeling of hesitation, as well as the desire to cross that line between fear and love.

There is an inevitable danger that lies beyond the line, but the happiness despite the unknown is enough to pull you in. Here’s the catch though, the moment you step forward, there is no way you can turn back.

Why are you standing there?

I’m just on my way home.

Did you just leave work?

No, I was with a friend.

I guess you guys called it an early night. Good boy. By the way, why did you call me?

I happened to see you on my way home, and I wanted to hear your voice.

I know we’re just friends. Don’t worry. I won’t cross the line. If things like this make you uncomfortable, I won’t do it anymore.

I’m not sure. I don’t know what’s okay and what is considered as crossing the line. That’s why this is frustrating.

Then what do you want me to do?

What can you do for me?

I love all of their conversations, but this one has to be one of the top three. It was so honest, it hurts.

The scenario can speak for itself. Jeong In was standing across the road from where Ji Ho stands, she’s so near yet so far! Add to this, Ji Ho happens to be behind a tree. That tree represents a hindrance – the boyfriend. During this time, he knew and understood the reason behind her reply. I strongly felt the frustration both of them are feeling at that very moment. Ji Ho already knew what he can do for Jeong In when she asked her that question. That is why, without thinking twice he stepped forward! But Jeong In had no other way but to stop him.

As Jeong In entered the restaurant to join her friends, her true feelings finally dawned on her. She looked outside with tears in her eyes because she knew she gave Ji Ho the wrong answer. Truth be told, she’d be the one to cross the line first.

Now everything came in full circle. Episode 14 had a lovely touch why crossing the line is the best choice anyone could ever make!

“I’m very happy that you’re not across the street right now.” Ji Ho sent this while he reminsiced and stopped at the restaurant where he called Jeong In one night after he had dinner with Young Jae. Ji Ho looked across an empty spot, this time with a smile on his face.

In contrast to this sweet message from Ji Ho, Jeong In replied with this:

“I’m so happy you’re just across the street from me right now. Again, don’t cross. I’ll go to you.”

I love the juxtaposition and the contrasting words they gave each other. This time, Jeong In was so delighted to see Ji Ho after a turbulent night with he-who-must-not-be-named. Seeing Ji Ho just across the street, she already felt his comfort from a distance. This genuine happiness fueled her to run towards him. This hug was everything! The combination of their love, and the warmth of knowing they have each other despite of anything, proves that this time they deserve to be together.

Finally, the reward of crossing the line has found its worth. 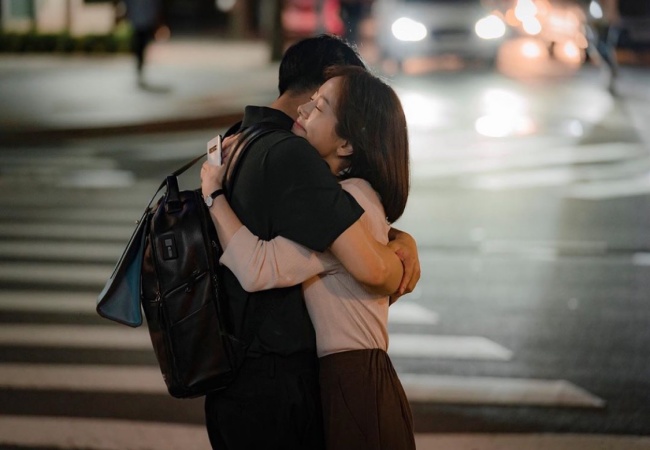 It feels to me like I’ve seen it all, but One Spring Night showed me that there is more than what I’ve already experienced. I have found a gem.

Thank you OSN, for this! ❤️